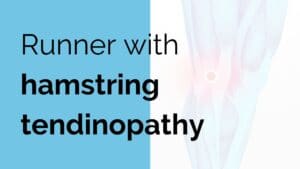 It feels like every report from an MRI of the hip, pelvis or upper thigh seems to come back with “Oh BTW, there’s a mild reaction in the proximal (upper) Hamstring tendon.”

So is a proximal Hamstring tendinopathy normal, is it a common injury or does it occur with other injuries?

How accurate is MRI for diagnosing Hamstring tendinopathy?

MRI is great for picking up small reactions, inflammatory responses and fluid.

It’s not as accurate in detecting structural change but it’s still fairly good.

So if your MRI finds a Hamstrings tendinopathy, it’s very likely that you have evidence of that condition.

If it doesn’t show up on the scan, there’s a possibility that you have a very low grade tendinopathy but the chance if it missing a moderate to severe tendinopathy is very unlikely.

How common are Hamstring tendinopathies?

This one is much harder to quantify. There’s no research specifically looking at the incidence of hamstring tendinopathy in people without symptoms.

Clinically we see around one third of MRIs of the hip, pelvis and thigh come back with an incidental finding of hamstring tendinopathy.

Keep in mind that these athletes have pain in and around the area and they’re likely to be moving differently, which can cause overload in tendons.

Hamstrings injuries are also one of the most common recurrent injuries in sport. We explain why injuring a hamstring can become a habit.

Does a Hamstring tendinopathy always cause pain?

Of the hamstring tendinopathies that show up on MRI, less than half are symptomatic.

When we perform our clinical tests for hamstrings loading, they have no pain or weakness.

So despite the MRI finding, it seems to be pain-free and functioning normally.

There are two common hypotheses on why hamstring tendinopathies are commonly seen in scans for other injuries.

One hypothesis is that the tendon will naturally react in any athlete participating in a running sport, and that MRI is so sensitive that it detects these normal reactions.

Another hypothesis is that any alteration to biomechanics, such as an asymmetrical running gait or a limp, will cause overload in adjacent structures and may cause the hamstring tendon to react.

What are the best exercises for treating a Hamstring tendinopathy?

If you’ve got a hamstring tendinopathy on MRI but you don’t have symptoms, it’s not necessary to start rehab for te MRI finding.

That’s not to say that you won’t benefit from hamstrings strength work – everyone will benefit from being stronger.

It’s just not essential to address an injury that’s not causing any symptoms.

If you are experiencing symptoms, or if you wanted to bulletproof your hamstrings, here are the best options for exercises.

This type of exercises involves the muscle slowly lengthening under tension and it’s great for tendon health.

In this category, the single leg deadlift is king. It’s simple and very effective.

This type of exercise involves the muscle under tension but without moving.

For this one, my favourite option is a reverse plank.

Plyo exercises involves bouncy or explosive movements such as jumping.

While these exercises are great for healthy tendons, I would be cautious about introducing them too early in rehab for a tendinopathy as they can cause inflammatory responses and overload.

Stretching for hamstrings injuries is usually unnecessary and risky.

Tendons don’t like sustained stretch and it tends to cause them to react, no matter how satisfying that stretching feeling is at the time.

There’s also no benefits for muscle length. Stretching actually causes no changes to muscle length beyond the few minutes after you’ve performed the stretch.