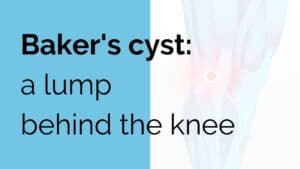 A Bakers Cyst is a pocket of fluid in a lump or bulge at the back of the knee joint capsule.

It causes a lump behind the knee, although this is typically not visible. It will show up on MRI and ultrasound scans.

X-rays don’t show fluid or soft tissue but can occasionally see a shadow in the space behind the knee caused by a Baker’s Cyst.

It’s not critical to confirm a Baker’s cyst via ultrasound or MRI however it can be helpful for long term monitoring.

Size of an average Baker’s Cyst

The average size of a Baker’s cyst varies depending on the amount of fluid and how long the knee had been swollen.

The size will also fluctuate from day to day depending on how much fluid and pressure there is in the knee. The Baker’s Cyst will worsen after any aggravating activity that causes more fluid to accumulate.

As the fluid is absorbed and reduced in the knee, the lump will also reduce in size.

What causes a Baker’s Cyst?

The cause of a Baker’s cyst is a separate injury in the knee which is causing fluid to accumulate inside the joint.

These injuries can include osteoarthritis, meniscal tears or cartilage defects.

How long a Baker’s cyst lasts for depends on whether the underlying injury is still producing fluid.

It’s worth noting that anti-inflammatory medication will stop or reduce further fluid accumulation but won’t get rid of the existing fluid already in the knee.

A Baker’s Cyst causes localised pain behind the knee. It also causes range of motion restriction with bending and straightening movements.

It can feel like a muscle knot behind the knee or an uncomfortable obstruction when bending the knee.

A ruptured Baker’s Cyst is often misdiagnosed as a calf tear or DVT (deep vein thrombosis). Due to the potentially dire consequences of a DVT, a doctor will often order an ultrasound scan to exclude any vascular pathology.

The ruptured cyst is usually not problematic and heals without intervention. The excess fluid in the calf is safely reabsorbed into the system, although this can take several weeks.

Management guidelines include avoiding specific types of exercises that involve compressive or twisting positions, such as crouching or pivoting.

This will reduce pain by avoiding compression of the existing Baker’s Cyst. It will also limit new fluid accumulating from the underlying cause.

If the knee feels tight, gentle exercise like walking can help the Baker’s cyst. It encourages absorption of the fluid inside the knee due to the gentle compression of the knee cartilage.

Need to know more about how to fix your Baker’s Cyst?

A compressive knee brace is only helpful when the level of fluid bulges past the bony edges of the joint. Otherwise it only exerts pressure on the bony bumps around the knee, not on the swelling.

Draining a Baker’s cyst is not painful but it’s usually ineffective as the source of fluid in the knee remains and the fluid pressure rebuilds quickly.

Stretching the muscles around the knee is counterproductive. Although the knee feels tight, stretching will increase the pressure inside the knee and aggravate the cyst.