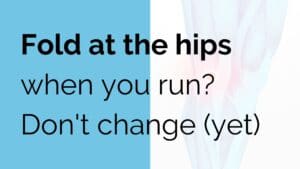 Do you fold at the hips when you run?

It happens more than we realise and sometimes it’s difficult to feel yourself doing it.

But we’ve all seen that other runner do it – they stick their bum out when they run.

You’ll often hear them prompted to stand up tall, to tuck your bum in, to not fold at the hips when you run.

And that can be great advice to improve efficiency and performance…or it can be disastrous, leading to a loss of pace and economy, and eventually injury.

The technique change that causes you to fold at the hips when you run is due to a increase in hip flexion (or bending) throughout the running cycle.

The hip swings further forward and doesn’t swing as far back.

This means that a lot of muscles around the hip don’t work in their optimal position, reducing your efficiency.

So the obvious change is simply to tuck your bum in and run up tall.

But the reality is that the body has decided to allow you to fold at the hips when you run for a reason. It might be due to a lack of muscular endurance – as the muscles fatigue, they sink into a bent position.

But more commonly it’s due to a lack of hip extension, the movement of the hip behind the body.

And there are negative consequences to correcting the bend at the hips if the hips are unable to move behind you!

What happens if you don’t fold at the hips when you run?

By straightening up, you’re forcing the hips to reach their end of range.

This in turn rotates the pelvis forwards and adds excessive force to the lower back.

This can lead to back pain during and after runs.

It also limits the available swing at the hip which means the hip can produce less force to propel the body forward.

This will manifest as a loss of speed and efficiency, particularly with a faster running pace.

Best way to correct folding at the hips for runners

Start with a warm up, obviously.

The best way to correct the “bent hips” technique is to run a 1km time trial with the existing natural technique (that is, with the hips bent and bum out).

Then reset and repeat after a 5 minute rest, this time focusing on maintaining an upright position.

If the 2nd time trial is faster or takes the same time with a lower average heart rate, it’s very likely that your hips have the available range and this new upright technique is the one to practice.

If you find that your pace drops, your back feels tight/sore or you are unable to maintain the position for the full kilometre, then it may be best if you go back to your original technique.

What to do after making a change to your technique

Any changes to technique should be monitored for a few months to ensure it’s heading in the right direction (ie. more efficient, injury-free running).

Watch out for new blisters on your feet, specific areas of muscular soreness or black toenails – click on each issue to read more about the causes and fixes.

Gradually work on improving hip range and strength before returning and repeating the test.

You can also add breaks into your running to avoid muscular fatigue, particularly if you’re new to running.

Improving range and strength is best done with exercises such as a Bulgarian squat or a lunge exercise.

If you fold at the hips when you run, you’ll need to understand the reason for the change before correcting it.

Most changes aren’t due to laziness or fatigue.

The brain figures of the best way forward given the existing biomechanical constraints.

Correcting technique without adjusting for the underlying biomechanics may move away from optimal for that runner, leading to worsening performance and injury.

That’s not to say you shouldn’t work on correcting the technique.

Just that you may need to slowly change technique while addressing the biomechanical cause behind the variation.