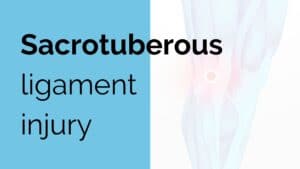 The Sacrotuberous ligament is a complex structure deep in the buttock.

It runs obliquely from your Ischial tuberosity (aka. your sit bone) to the Sacrum, just above your tailbone.

Unlike most ligaments, which usually control and restrict joint movement, the Sacrotuberous Ligament functions more as an anchor point for other structures, including the Hamstrings muscle.

It is usually irritated and becomes painful in high hamstrings injuries and can cause the typical Hamstrings tendon pain to extend up into a deep buttock pain.

So what is a Sacrotuberous Ligament? What does it do? How do you injure it? And how can you fix it?

What is a Sacrotuberous Ligament?

The ligament connects the Sacrum to the Ischium.

There’s a matching ligament on each side of the Sacrum.

You can find it easily by sitting relaxed (so your gluteal muscles aren’t active) then find your Ischial Tuberosity or sit bone, the bony bump where your buttocks meet your leg.

From there, palpate along a line from that bump upwards and inwards, towards your tailbone.

If you roll back and forth, you’ll feel a broad tense structure that joins the two points.

It’s about 1-1.5cm (about half inch) wide and is usually not painful to palpate (although if you’re reading this article, yours might be tender).

What does it do?

The Sacrotuberous Ligament performs a number of tasks to control SI joint movement.

It also provides a secondary anchor point for the hamstrings muscle group.

How do you get a Sacrotuberous Ligament injury?

Most Sacrotuberous Ligament injuries are the result of hamstrings overload pulling on the secondary anchor.

If the hamstrings are overloaded when the hip is in a neutral or extended (leg behind you) position, the Sacrotuberous Ligament is usually not involved.

This is because the bulk of the hamstring forces are transferred to the main anchor points on the Iscium (sit bone).

Sacrotuberous Ligament injuries occur when the hip is in a flexed/forward position with the knee almost straight.

This position causes the Sacrotuberous Ligament to be pre-tensioned, then the additional hamstring loading adds the sudden overload.

So it will feel like a hamstring strain with the muscle in a stretched position.

After the initial hamstring symptoms settle – this might be muscle soreness or tendon soreness – there is a residual deep in the buttock.

That residual ache is the Sacrotuberous Ligament (ST) injury.

How do you fix ST Ligament injuries?

Lets start with what to avoid – the ST ligament hates prolonged stretch. So hamstring stretches are out as they only contribute to the irritation.

The other “avoid” is direct pressure. Although it may feel relieving for a short time, trigger point balls and direct massage aren’t helpful.

The ligament responds well to loading in lengthened positions, as long as it’s only causing discomfort and not pain.

So a single leg deadlift is a worthy addition. You can gradually progress the depth of the deadlift, then add weight, and lastly add speed to the movement.

The second exercise needs to build strength in the muscles that support the hamstrings. This helps spread the load elsewhere.

For this one, you can use a Bulgarian Squat with a shorter stride length or a single leg hip bridge.

These exercises can build gluteal strength with a mild degree of hamstrings loading.