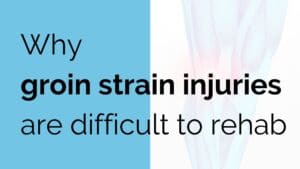 Groin strain injuries, also called “Adductor muscle strains”, typically occur when the muscle is subjected to a sudden overload. This can happen during fast cutting/agility movements, sprinting or direct loading such as a soccer tackle.

Groin strains can prove difficult to rehab and are prone to recurrences. This is because of their unique biomechanical role.

The adductor (groin) muscles perform two primary functions. The first is to pull the leg inwards. This occurs during agility movements such as side stepping or pivoting and when kicking a ball.

The second function is to assist with rapid and high power movements of the leg. The adductor muscles help move the leg during sprinting, generating both flexion and extension moments. They’re also active during a squat movement.

So the main principle of rehab programs – to expose the injured area to gradually increasing incremental loads – proves difficult for groin strains.

The rehab program for a groin strain needs to take the injury right through to a successful return to sport. So the sporting goal must dictate the program, with a few common elements. Avoid prefabricated programs that seem generic and without specific outcomes.

Every groin injury is different – different muscles involved and different severity, just to name two aspects. So following a time-based progression of any program doesn’t make sense. Programs may be written as “Week 1”, “Week 2”, etc but don’t feel pressured to follow those timeframes.

Only progress to the next rehab phase when the current level becomes easy, doesn’t seem as challenging and doesn’t cause an increase in symptoms.

This is useful for any athlete progressing back to running sports, including football, basketball and netball.

See our post on running phases for returning to football for the full details of this part of the program.

Building back up to kicking a ball or performing a soccer tackle is a challenge for any rehab program. It’s a difficult action to mimic with reduced loading or speed.

These steps provide a framework for this part of a program, although it may need to be modified for different styles of kicking.