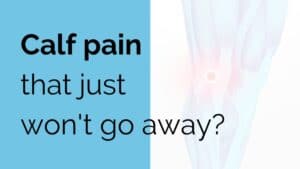 Calf pain that just won’t go away is actually a fairly common complaint.

It can start as calf tightness or a knot in your calf that won’t go away and gradually becomes more painful and limiting.

Your calf pain grows in intensity with activities like running or football, especially if you’re working harder or for longer periods.

Want to skip straight to our recommendations for the best running shoes for calf pain? Click here.

Frustration with persistent pain often comes from difficulty in figuring out what’s causing your pain.

“It should be simple”, you say.

“Calf pain is probably a calf muscle strain”, you say.

Your sore calves can come from any number of causes: Bone stress, nerve problems, blood flow issues and knee swelling, just to name a few.

Looking for the best running shoes for calf pain? We’ve got all the best options here.

Want to start an exercise program for calf pain and running? Here’s an effective bodyweight program.

Feel like rest is making things worse? Our Physios explain why rest can be a terrible plan for calf pain.

Why does it feel like a knot in your calf muscle?

The feeling of a knot in the middle of your calf muscle is a common complaint.

It feels like the muscle is twisted into a ball, or “knot” which just won’t go away.

The feeling of a knot in your calf muscle that just won’t go away often comes from a small area of muscle that is damaged or reactive.

That small area doesn’t move and stretch like the surrounding muscle bundles, so it feels like a knot in the muscle when you use the muscle.

It can cause calf pain as it pulls on the surrounding areas of the muscle or, if it’s torn, as the damaged area tightens up.

But the knot or calf pain might also be coming from other structures – bone and blood vessels can also cause pain.

Nerve can cause a section of the muscle to fire continuously, creating a knot in the calf muscle with a localised reaction and calf pain.

What’s the best way to work out what’s causing your pain?

As Physiotherapists, we’ve devised a simple approach to confirming your own diagnosis, detailed in the section below.

If you are looking for something more accurate, obviously a trip to your local physiotherapist would be your best bet.

If you would rather not spend your cash on a physio visit, the next best option would be a diagnosis via e-medicine.

Best of all, it costs you nothing to get an accurate diagnosis!

How to diagnose your calf pain

To narrow down the possible causes of your calf pain, you need to start with the pattern of pain over the course of a run or fast walk.

Does your pain starts as soon as you start and improves over the course of the run/walk?

Likely diagnosis: an inflammatory response from a tendon or even a muscle attachment point on the edge of the shin bone.

Does your calf pain gets worse as the run/walk goes on and last 1-3 days after the session?

Likely diagnosis: Bone stress will typically ache for 1-3 days after every run. It will ache even when you’re not putting pressure on the leg.

Does your calf pain gets worse as the run/walk goes on, eases soon after you stop and get worse as soon as you start again?

Likely diagnosis: Muscle fatigue will usually be sore when the muscle is active or stretched but the pain goes away if you’re not loading or stretching the muscle. This will also occur in compartment syndrome.

Does your calf pain gets worse as the run/walk goes on, eases when you stop and only get worse after another extended period of exercise?

Likely diagnosis: Blood flow issues (we’re not talking about DVT or acute vascular issues) will usually get progressively worse as the duration of exercise increases. The calf pain eases soon after you stop running and gradually builds again as you return to running.

Does your calf pain gets worse as the run/walk goes on and extend into the ankle and foot or up into the hamstrings?

Diagnosis: Nerve problems, such as sciatica, can also referred pain to the calf.

But typically as the condition worsens, the pain will extend down into the foot and/or up further into the hamstring.

Note that blood flow issues can also have symptoms that extend down into the foot but not up into the hamstrings.

How to relieve persistent calf pain

Much like any injury, we need to take a multi-pronged approach to relieving calf pain.

This could involve changing your current level and type of activity, rehab exercises for calf pain and/or adding additional support (such as tape or new shoes).

In this step, we need to figure out the most provocative activity for your calf pain, such as running.

Score your pain out of 10 (called a pain scale) at a key point in the day – this might be one hour after the run, or pain at the 5km mark.

You’ll then need to adjust one of the parameters to begin to reduce the load on the calf.

In the example of running, that may be distance or time, or it could be elevation change (hills v flat).

This may mean that you have to keep running the same route for a while as it’ll be hard to compare one route to the next for difficulty.

Stick to the reduced loading for a week and then score your pain on the pain scale again.

If your pain has reduced by 2/10 or more, you’re on the right track.

Continue with the same restrictions until your pain gets to 3/10 or less, then begin to gradually return to more loading.

If your pain hasn’t reduced after a week, you’ll need to restrict your training further for the next week.

Repeat this process until your pain has eased and you’re back to full capacity.

Step 2 – rehab exercises for the calf

This isn’t as simple as doing 1000s of calf raises a day – that often makes calf pain worse.

If your calf muscle is overworked, adding fatigue from calf raises only makes that worse.

And by making it stronger, it becomes more dominant and even more overloaded.

Your best approach to rehab exercises is to strengthen the muscles that can help to do the job of the calf.

Focus on building strength in other areas to relieve the load in the calf muscles.

It’s a slow build so be patient and consistent – strength improves within a few weeks but you won’t suddenly run faster and your calf pain won’t just switch off.

This step refers to anything that might help support the cause of the pain.

It might be taping to help foot stability, if your cause of calf pain is overloaded stabilisers.

It might be heel inserts, if your cause is a lack of ankle range.

You get the idea – each approach only works for a specific cause of calf pain.

So if a friend mentions that orthotics fixed their calf pain, that would be because it fixed whatever was causing their injury.

We hear of many disheartened people who tried all the “guaranteed” fixes and ended up wasting time and money.

So for this step, I’d suggest you invest in a session with a good Physiotherapist and take their advice on what’s causing your calf pain.

Otherwise it’ll be more expensive to experiment with fixes in the long run.

What if the knot in my calf keeps happening or doesn’t settle?

Persistent or recurrent calf problems are one of the most frustrating problems faced by runners and footballers.

Just when you think you’ve got on top of the issue….BAM! It gets you again.

It’s important not to get too overwhelmed with the emotion of the situation. Take a few days and a few deep breaths

Don’t push it for the 2-3 days after you feel the tweak. This is critical to figure out how it’s going to respond.

Most tweaks will pass within a day or so and you’re back on track. If it feels normal after a day, aim to slowly rebuild your training intensity over the next two weeks.

If it’s still troublesome after 3 days, start your basic rehab exercises – double leg strength work, hip strength exercises and some trunk work. Prolonged rest after a tweak makes it more likely to get overloaded on your return.

After a week, if you’re not feeling it, test it gently with some single leg calf exercises and a light jog. If it responds well, rebuild your intensity over the next 2-3 weeks.

If you’re still feeling the calf pain or knot after a week, assume there might be some structural injury in there and recommence the slow build of strength work and gradual reloading.