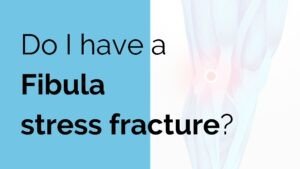 That’s because the Fibula isn’t like other leg bones – it’s not a weight-bearing bone!

When you land, the thicker shin bone takes all the impact while the thinner Fibula is only an attachment point for muscles to gain leverage.

That’s not to say that the Fibula isn’t loaded on landing, just that it’s loaded by muscles pulling on it.

So what are the symptoms of a Fibula Stress Fracture?

The first warning sign is a vague pain on the side of the calf.

It feels similar to an overworked or sore muscle, not like you might expected from a broken bone.

That can get confusing because the most likely cause of lateral calf pain IS an overworked muscle.

Initially it only feels sore after exercise and settles within an hour – this is the bone stress reaction phase, before the bone has developed a crack in it.

The more intense the exercise, the greater the post session soreness, but it still settles within the hour.

Next phase of the injury, the soreness begins to last longer.

What used to resolve in an hour or two now takes longer that 24 hours to disappear.

In the last phase before a stress fracture, we often see the symptoms become more constant.

The intensity may vary but it’s still aching day and night, regardless of exercise.

How is a Fibula Stress Fracture diagnosed?

The 3 signs that you’re looking for are:

If you’re 3 from 3 on the above tests, you MAY have a Fibula stress fracture (remember that they’re quite rare so it’s possible but still unlikely).

From here, you’ll need to get confirmation.

The next step for most people is a clinical diagnosis – that is, getting assessed by a doctor or physio.

There is usually enough to suspect a Fibula Stress Fracture but not enough to CONFIRM a stress fracture.

From here, imaging is needed to get a confirmed diagnosis.

MRI is the best option, but also the most expensive.

It can see bone reactions as well as cracks in the bone. It gives the whole picture, including any adjacent reactions or injuries such as tendon splits.

X-ray is not sufficient as it’ll only see a bone that has already cracked.

Even then, it’ll only spot it if the crack is at a particular angle (relative to the image).

Bone scan is helpful as it shows the bony reaction around the stress fracture.

It can’t see the fracture itself but it’s good enough to confirm a significant bone reaction.

CT scan shows a much more detailed picture of the bone but, like an X-ray, will only see a bone that’s already cracked.

It can’t spot the reaction that’s the immediate precursor to a fracture.

What’s the rehab plan for a Fibula Stress Fracture?

Fibula stress fractures tend to occur because of the actions of FHL (big toe muscle) or Peroneals (lateral ankle and medial foot stabilisers).

The first step in the rehab is to back off the causative activity.

That doesn’t mean rest! (read our post here on the negative effects of rest – the impact of surprising and kinda scary!!)

You can still keep active, provided it doesn’t cause pain or load on the stressed bone.

Then you’ll need to add in a strength program to maintain muscle function while you’re not as active, even if you’re in a boot.

Lastly, you need to rebuild the causative activity.

You can return to running after 4-6 weeks but you’ll need to back off the pace.

Over the next few weeks or months, you can gradually return to fast paced running as the bone adapts and strengthens.

It’s important that you listen to your body and give yourself enough recovery time between training sessions.

Remember that you’re recovering from reduced activity, so you can’t flick a switch and be back to normal in a week.