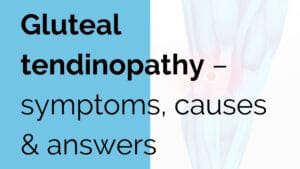 Gluteal tendinopathy symptoms include pain on the lateral (outside) aspect of the hip, often felt during exercise or walking. Pain can also be felt when lying on either side or on standing after prolonged sitting.

This tendon condition can occur on its own but is more commonly seen in conjunction with other conditions, such as hip osteoarthritis and trochanteric bursitis.

It tends to be linked closely with reduced strength and as such, it is more prevalent with older age groups. The strength deficit leads to poor control of hip rotation, which in turn tightens and overloads the Gluteal tendon.

Symptoms of gluteal tendinopathy can be varied but there are some common elements. Pain on the outside of the hip is by far the most common complaint.

Symptoms can also include a dull constant ache or a painful snapping sensation in the same area but won’t include pins & needles or numbness – these are more likely to be associated with spinal nerve compromise or Lateral Femoral Cutaneous Nerve injuries.

Pain from gluteal tendinopathy is aggravated by running, walking (particularly walking downstairs) and side lying in bed. But it can also be stirred up by activities such as swimming due to the kicking action.

The direct cause of gluteal tendinopathy is an overload of forces on the tendon. This can come from too much prolonged loading (like a very long day of hiking) but is more commonly associated with repeated spikes in loading (from a combination of rapid stretch and “shock loading” from poor muscle control).

When the muscle becomes fatigued, or leg stability is compromised, the leg rotates inwards quickly on landing. This causes a sudden pull on the tendon, which in turn creates an acute inflammatory reaction.

Over time, this reaction accrues and begins to cause pain. And that’s where the downwards spiral begins…

The ability to maintain strength in the hip muscles becomes limited by pain inhibition of muscles in the area. Basically the brain won’t fully activate the muscles if it thinks that will cause pain, so the pain “inhibits” muscle function.

That inhibited muscle function means that the rotation on landing is even more rapid and poorly controlled, creating a more significant reaction on the tendon. And so the cycle continues….

What is the best treatment for gluteal tendinopathy?

The biggest issue with making progress and fixing gluteal tendinopathy is trying to break the cycle of pain and inhibition.

Anti inflammatory meds can help make early progress by reducing pain and improve muscle recruitment during exercises. That can allow you to begin to rebuild strength around the hip.

If you’re sensitive to meds or who prefer to avoid them, you can relieve symptoms with a non-medicated heat rub (eg. Dencorub) which can be quite effective at blocking out pain and improving muscle function.

You’ll need to select strength work that doesn’t cause pain and can be performed with good technique. My preferences are, in no particular order:

These exercise can build strength in safe positions while avoiding symptoms. Exercises to avoid, due to their likelihood of irritating the tendon, include:

Running can still be an option but it’ll be safer if you can break it up into a run:walk format. Run until BEFORE the pain starts, then take a walk to avoid accruing fatigue, then run again and repeat. The run time is case-specific but the walk can typically be 2-4 minutes (shorter timeframe for more experienced runners).

Don’t get caught out by these myths

This condition resolves completely in almost every case although it can be quite stubborn and slow to resolve. Don’t get frustrated and return to full loading prematurely. Just be patient.

A cortisone injection may seem like a quick fix but it’ll only be successful if the underlying cause has been found and fixed (such as a single bout of overload, like an ultramarathon). It can be helpful to start your exercise program without pain but it’s a limited window to attack your exercises, not a cute in itself.

Supportive shoes and/or orthotics can be helpful for some but they’re not a guaranteed solution for all. They’ll only be successful if poor rotational control of the leg is the major factor in your causative biomechanics. If it’s a result of the pain and pain inhibition cycle, it’ll only provide limited relief.